← more from
Sacred Bones Records
Get fresh music recommendations delivered to your inbox every Friday.
We've updated our Terms of Use. You can review the changes here.

Never Learn Not to Love / Cease to Exist 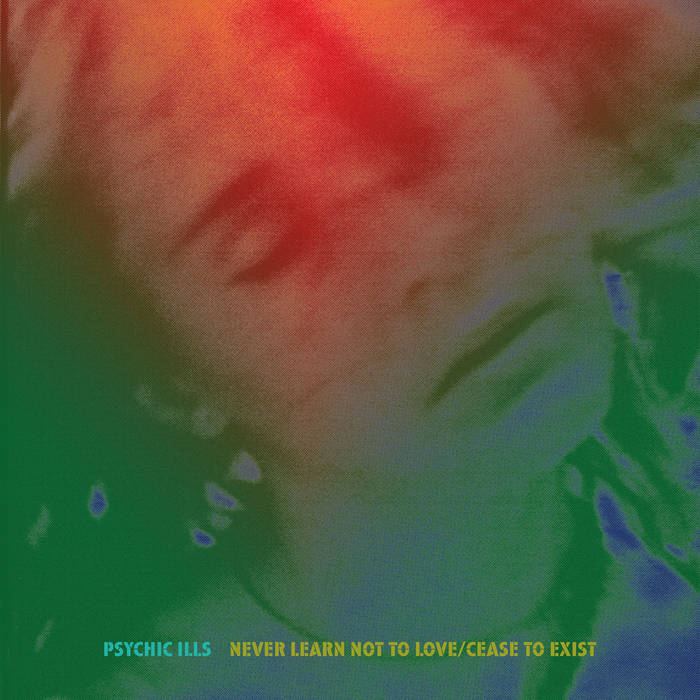 Levrikon Two versions of this infamous song, written by Charles Manson and recorded by The Beach Boys. Never Learn Not to Love is full of lysergic beauty, liquid and lush. Cease to Exist is disturbed and disturbing, full of bad-trip paranoia. RIP Tres Warren. Favorite track: Cease to Exist.

In March 2020, the music world mourned the loss of Psychic Ills founder, frontman, and songwriter Tres Warren. At the time of his death, Warren was overflowing with creativity, actively writing new songs, and excited about the next phase of the band. He was preparing to go into the studio alongside longtime collaborator Elizabeth Hart and their bandmates to record the sixth Psychic Ills full-length, which was supposed to be out this fall. While those songs were tragically not recorded, the band did record a pair of covers for a new 7". “Never Learn Not to Love” and “Cease to Exist” are the first new Psychic Ills songs to be released since 2016’s Inner Journey Out, and while they no longer precede a new album as originally intended, they stand as a celebration of Tres Warren’s beautiful musical spirit.

Originally appearing on The Beach Boys’ 1969 album 20/20, credited to Dennis Wilson and with changes to the arrangement and lyrics, Never Learn Not To Love was written as Cease To Exist by a then unknown songwriter named Charles Manson. His version would eventually appear on his album Lie: The Love and Terror Cult, released in 1970, by which time he was already incarcerated for the events that he is most commonly known for today.

How a version of that song came to find its way onto The Beach Boys album is the stuff of legend, and Charles Manson’s disappointment with the lyrical and structural changes is well documented. The Beach Boys simultaneous adherence to and departure from the original has long been a point of fascination for people, but Psychic Ills frontman, Tres Warren, says it’s something less tangible that has kept him coming back to both songs through the years. “The soulfulness is what has always spoken to me in those songs. I gravitate towards that(soul) in music, and both of these songs have it in spades. I almost shed a tear every time I hear Dennis Wilson sing.”

Psychic Ills’ version of Never Learn Not To Love echoes the arrangement and feel of The Beach Boys recording, but the female gospel backing singers make it more reminiscent of a Phil Spector production than that of Brian Wilson. “We wanted to honor the originals, but we didn’t want to cover them note for note.” Warren says, adding “We wanted to bring them to where we are.” Which seems like an apt statement as Never Learn Not To Love is a dense electrified rock and roll song reminiscent of recent Psychic Ills songs like it.

On the flip side of the record, Cease To Exist couldn’t be sonically more different. Where Never Learn Not To Love has a fullness from an instrumentation and sound quality standpoint, Cease To Exist thrives off the intimacy of the performance and transparency of the documentation, bringing the singing and playing into full focus, in a similar manner to the Manson original. There’s no question that this was recorded in very few takes, and that by-the-seat-of-the-pants feeling is further reinforced by the unedited studio talkback left in at the beginning. “Ivi is it rolling?” Warren asks engineer Iván Díaz Mathé as he begins the song, the band naturally falling in behind him reminiscent of jazz players adhering to both their own cosmic cues and those of the collective whole.

Never Learn Not To Love/Cease To Exist is an interesting experiment, successful in both concept and execution, and a typically non-traditional way to announce that Psychic Ills, have a new record coming soon. They continue to be a journeyman band, in an era where few exist, and a band you can count on to continue to expand on what they do as they have with every record, but never at the expense of what makes them Psychic Ills…their feel. They’re still weary and wanting, still searching for something.

When it comes to following the beat of their own drum, New York’s Psychic Ills have exemplified the phrase since their beginnings in 2003. Initially spawned from electronic-centered home recording experiments, they progressed into all-night full-band exploration in a neighborhood where noise wasn’t a problem. ... more

Bandcamp Daily  your guide to the world of Bandcamp